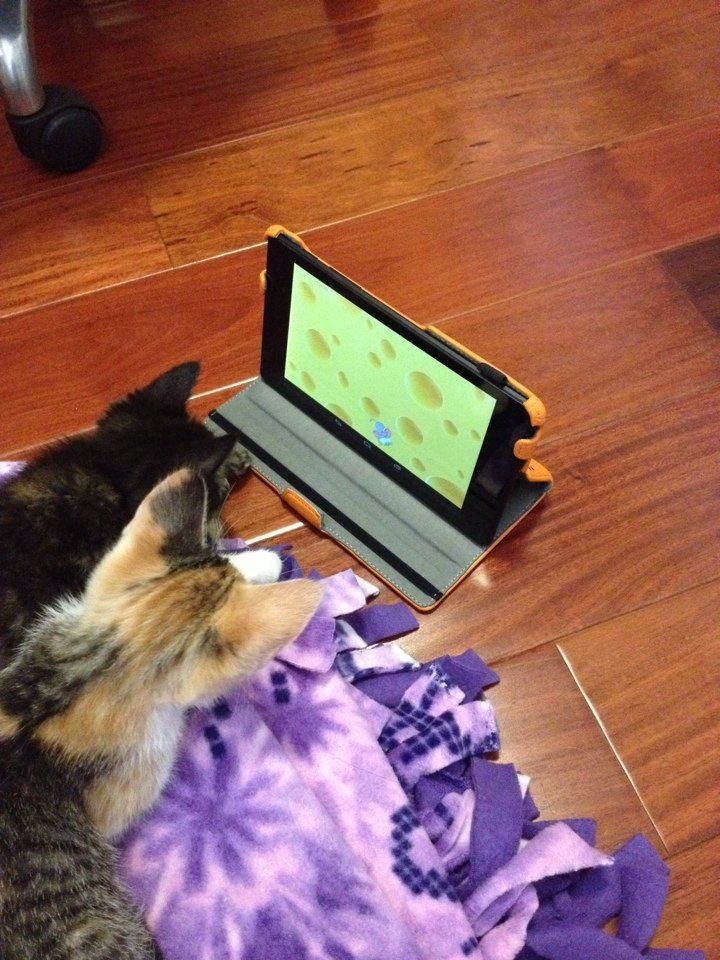 My two new kittens, Copy and Paste, are digital natives and addicted to tablets! What a proud nerd mom I am. See below for the cool tablet apps that will mesmerize your fuzzy friends.

We tried two Android apps and four iPad ones, mainly because Friskies has a series of toys for the iPad, and we got them all.

The favorite by far was the iPad’s Catch and Paint Cat Games — specifically the mouse setting. That’s the one they’re playing with in the first part of the video. They liked the lifelike mouse, I think, and it’s quite noisy. The fly setting bored them. I paid a buck ninety-nine for the app, so it wasn’t a bad deal for the entertainment.

The Friskies games were duds, as far as the kittens were concerned. They never even looked at the bugs in JitterBug, and the fish one was a nonstarter. But they were free, so at least I didn’t lose any money.

Pond Pocket 2 on Android was a little interesting to them, but they didn’t really interact with it. It might have been because most of the fish were really small on my small Android tablet screen. Pond Pocket is also an app for people (or maybe it’s supposed to be for people). It’s a lily pond habitat with koi that you have to nurture and maintain — kind of like Farmville, I guess. The fish and frogs look real, and the water plops sound very ploppy.

After the fish in the pond, the kittens watched Crazy Cat like it was TV, but it didn’t squeak as much, so they didn’t touch it. I found the animated mouse to be very cute, but the cheese background was pretty dull. Both the Android apps were free with upgrades available. BatchGeo: Map your customers and more
Why I will never love Evernote