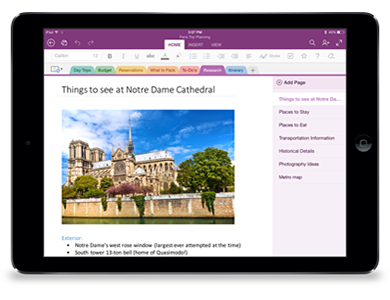 This week Microsoft released its long-awaited versions of the most popular office apps for iPad: Word, Excel and PowerPoint. Tech bloggers, including yours truly, are generally very impressed, and it looks like Microsoft released apps worth using. The lovely thing about the apps is that they’re very similar to the PC/Mac formats we all grew up with — the ribbon across the top, the views, the graphic options. BUT… and this is a big BUT, the apps are pretty much worthless without a subscription to Office 365, Microsoft’s software suite in the cloud. If you don’t have Office 365, you can’t create or edit documents — just view what you already have. If you’re in one of the apps, you can open something stored on your iPad or pull down files you’ve stored in Microsoft OneDrive. I store everything in Dropbox, and I can go to the file in Dropbox and click on “Open With” to get into the proper Office app.

The beauty and functionality of these apps on the iPad finally pushed me to subscribe to Office 365 since my husband needed an office suite on his new computer anyway. I found a discounted product key here, so our first year will cost us less than $70 for five machines, which means I can use it on my Mac and other mobile devices as well.

If you’re not willing to sign up for Office 365 and want an awesome office tool so you can do real work on your mobile device, you might give CloudOn a try.