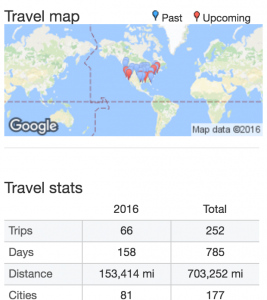 According to my best travel app friend TripIt, I’ve been on the road 158 days this year. All those miles on a plane equals a stiff back, aching shoulders and just plain old road fatigue.

The other day I hobbled off the plane for a weekend at home, and came to the conclusion that it was time for a massage.

I didn’t get around to looking for a spa appointment until Sunday morning, and I couldn’t find a place that could get both me and the hubby in with such short notice. I said to myself, boy, I wonder if there’s an app for this… and voila! A short search lead to Soothe, an app that brings professional masseuses to your house within an hour. You can book through the iOS or Android app, or even online.

At 8:50 on Sunday morning, I booked a 90-minute couple’s massage for 10am for $139 each. The system works like Uber, where you put in a request for a service, and providers are offered the opportunity to accept the assignment. My husband prefers a female therapist, and I will take either. Almost immediately a therapist accepted for his massage, but I waited nervously for about 15 more minutes with no confirmations for my massage.

I placed a call to their helpline, which went to voicemail. I hung up without leaving a message, feeling stressed out that I wouldn’t get a massage. Within a minute, my phone rang, and someone from the company offered to help solve my problem. Apparently the call for therapists had not gone out to both men and women because I specified woman only for D.J.’s massage. The customer service agent put out a call to everyone, and at about 9:35, someone confirmed.

Both of our therapists had exactly the same description on their profiles. That was a yellow flag.

[Insert name] is a skilled and passionate Massage Therapist with seven years [they BOTH said seven years] of experience. [He/she] specializes in swedish, deep tissue, sports, reflexology and prenatal techniques. [Name] has partnered with Soothe to provide therapeutic and effective sessions to clients, in-home and on demand!

Both therapists showed five blue stars under their name, but the way they looked, I couldn’t figure out if they were ratings or just a decorative border. Another flag. D.J.’s therapist arrived first, and she said that indeed she had received all fives in the ratings, so perhaps they were true representations. Perhaps.

Deej and I had cleared out our living room for the massage tables. We lit a bunch of candles and darkened the room. I asked Echo, the Amazon Alexa device, to play some spa music. It was quite lovely and peaceful.

My guy was late and frazzled. His man bun was wet from a quick shower. He kept apologizing, saying that the notification from the app was what had awoken him that morning and that he barely had enough time to rush over. The other therapist waited patiently while my guy set up. I told her to get started with D.J., but she said with couple massages they were supposed to start and end at the same time.

My guy immediately identified the tight knots in my back and went to work. And worked. And worked. And worked. At one point he asked permission to sit on my but backward so he could work on them harder. The guy weighed about 120 pounds, so it certainly wasn’t painful — and not even all that weird (until I got the mental picture of it).

At the end of the 90 minutes, it got a little weird. The other therapist had finished D.J. and was packing up. My guy was still kneading on my knots. Although his profile said he had seven years of experience, the other therapist was definitely more seasoned. He called her over to ask for tips about my problems, and she ended up working on me for a few more minutes, answering his questions about anatomy and therapy. He asked her for her contact info so he could get more advice from her. Then he packed up and left.

We tipped both of them, even though the app says the tip is included. We gave her more than him because, gosh, even he thought she was more experienced than he was. I rated them both a 5, even though I probably should have given him a 4. But he was nice, and he sat on my butt, so we were kind of connected.

I talked to both of the therapists about Soothe, and they both loved it. They said the people who run it are wonderful and that they earn a good wage from their work. The woman therapist said she works for Soothe all the time. The guy said he doesn’t get many opportunities because women are requested more often.

Overall it was a great experience: reasonably priced, very fast, mostly professional and pretty much as advertised. I’d use them again anytime. It was probably less than half of the price of a trip to a luxury spa, and it was incredibly convenient. Soothe is available in lots of cities, and I’m thinking of using them from time to time when I am on the road.

ergonomics, on the go, travel